(NOTE: You’ll need to scroll down past this post if you want to read: ICE SHELF RESCUE, this month’s free fiction story.)

2. Ten thousand parts that just happen to be flying in the same direction. (That was the popular helo t-shirt when I was flying airplanes in the 1980s. I like this one a little better even though it appears to be out of fashion.)

One thing that helicopters aren’t is…FAST! (At least not until recently.)

1. Moving or able to move rapidly (per Merriam-Webster)

Let’s look at a few examples from the flying world. (We’ll just look at “Cruise” speed. Cruise is the speed used during normal flight when going from here to there.)

The “New” Fast in Helicopters

Then along came the S-97 Raider.

So, how did they do this?

Let’s start with the basics. Take a close look at the helo on the cover of my and Miranda’s next book.

There are two very strange things going on here.

First, the coaxial (stacked) rotors. There’s a lot of physics behind this, but the key point is that because there are two of them, the rotor blades are shorter for the same amount of lift. Why does this matter?

A lot of very strange things happen when you break the sound barrier. That’s why what Chuck Yeager did in the Bell X-1 was so amazing. However, he had it easy in comparison to a helicopter rotor–all of his ten thousand parts were moving at the same speed. Now imagine a rotor spinning fast enough that most of the blade is subsonic, but the tip is moving at supersonic speeds. That is when parts start falling off at inopportune moments as I mentioned above.

Then it gets even more exciting as the helicopter moves faster. The rotor on a Chinook helicopter is 60′ across and is spinning 4 times/second. The tip of the rotor blade is moving at 514 mph. No problem.

HOWEVER: The retreating rotor blade is actually going backward at 514 mph tip speed – 200 mph speed of flight = 314 mph (400 mph slower than the advancing blade tip just 60′ away)… Like I said, it gets complicated.

So, the coaxial rotor helps (because of the possibility of using shorter blades for the same amount of lift), but it doesn’t solve everything. The Russian Mi-28 Havoc gunship helicopter is not some super-fast performer: (Cruise: 150 knots / 170 mph)

Why the Raider is Really Fast?

Look at the picture again: 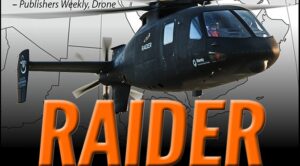 Notice the propeller stuck onto the tail. This 7′ diameter rear-facing propeller drives the Raider ahead. The shorter coaxial rotors mean that the tips of the blades are: a) not turning so quickly and b) aren’t plagued with retreating blade vs. advancing blade issues because each side had both a retreating and an advancing blade stacked, so it can go fast!

At least until it crashes, but for that, you’ll have to read the book!

White Top
Disclosure of Material Connection: Some of the links in the page above are "affiliate links." This means if you click on the link and purchase the item, I will receive an affiliate commission. I am disclosing this in accordance with the Federal Trade Commission's 16 CFR, Part 255: "Guides Concerning the Use of Endorsements and Testimonials in Advertising."
Reading Order
Audio Only
Bundles & Deals