(This post will have some minor spoilers for Miranda Chase #8, White Top.)

Please note that the following is written by a white, hetero male of the Baby Boomer cohort who has been happily married to a woman for almost a quarter of a century and looks forward to at least that much more of the same. Any offense to any group or individual is wholly unintended. My goal is rather to inform about a wider view I have learned and found supported by research.

Before we go on todays’ main topic (autism and sexuality), I’d like to take a moment to discuss this briefly due to its relevance to what comes below.

The MeToo movement has finally exploded into the news and is starting to weave its way into the fabric of our culture. My comment? About freaking time.

As my fans know, I’ve always been about writing amazing women. Some are kick-ass take-no-prisoners types (Yes, Emily Beale, Kate Stark, and Holly Harper, I’m talking about you). But others are the quiet heroine. The ones who operate from a place of understated brilliance (Miranda Chase, and Perrin Williams in my Where Dreams series to name but two.)

So the MeToo train? I was already on it years ago and I’m cheering ever moment of it. The theory that our society should treat women as people strikes me as kind of a “Duh!”—it is in the top 3 themes of every story I’ve ever written.

There is a history here you don’t want to get me started on right back to the Paul’s original writings and then the Council of Nicea in 325 AD when approximately 300 male bishops redrafted the Bible by choosing what books to include. The conclave of all men, among other crimes, did their best to remove women from almost all significant roles (right down to recasting the woman that a growing body of evidence said could well have been married to Jesus, instead naming her a whore). [Note: modern religious scholars have cast out ancient writings speaking of their marriage as forgeries… Is that truth or are they protecting their beliefs? I’m not in a place to judge but, based on past history, I find it hard not to reach certain conclusions regarding institutional bias.)

Let me just say that as a white hetero male, I find these and other actions to be a horrific reflection on my gender. (I really want a third primary gender: women, decent men, and the rest of the bigoted, misogynistic, abusive male jerks.) As I said, don’t get me started.

But there is another battle that’s been going on a long time and may have an even higher hill to climb.

And this is what I want to delve into a little today. Some have expressed surprise, even shock at a choice Miranda makes at the end of White Top. Here’s a bit of the nerding out that I did when she came up with the idea.

I’m a Boomer, born at the end of the 1950s. My social and sexual mores were formed through the lens of the “wild” ’60s and the “conservative” backlash and disaffection of the ’70s.

So, I did some research. Based on a Gallup poll of 15,000 individuals, Statista created this summary chart. 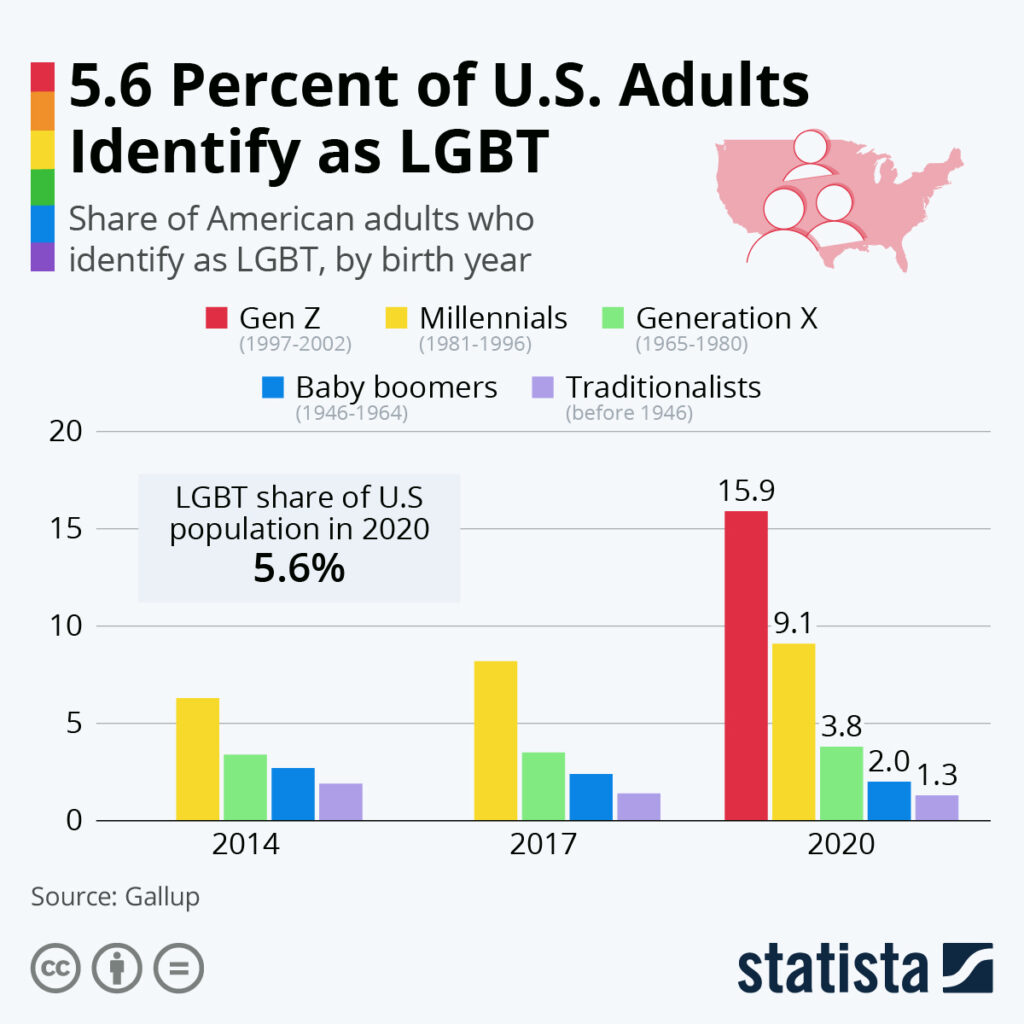 Yet here I am writing almost strictly hetero relationships. That statistic got me thinking and led me to write Brenda in Wild Fire (Firehawks #5) and Tricky Dog Gals (White House Protection Force stories #5).

To say that I did a lot of research to create Miranda Chase as a believable person on the autism spectrum would be an understatement. My kid has been an autism researcher and therapist for over a decade. And she was bringing books and discussions on the subject into the house well before that.

And one fact (of kajillions) was tucked away in my writer brain waiting for White Top. One of the common challenges faced by an autistic is the inability to understand “social norms.” The nuances of “correct” ways to be, behave, when to speak and when not to—and so many more—can completely elude the autistic. They may learn by rote how they’re “supposed” to behave in a public setting, but it is not something they can understand.

Along with this comes another challenge, unless it’s an advantage. Their inability to perceive social norms will make them less likely to conform their thinking to those norms. An individual on the autism spectrum will spend a great deal of time asking “Why?” Why is it done this way? Why do people do that and not this? And a common response to the answer will be, “But that doesn’t make any sense.” Societal constructs are, in that sense, false. They are rules we neurotypicals (those not on the spectrum) have created to run our society.

The more I’ve learned about people on the spectrum, the more I’ve come to truly understand that it’s not necessarily because they have some deficiency. In many ways, I think they have an increased range of view uninhibited by society’s imposed expectations. An autistic person may actually be far more rational as this Science Direct paper suggests.

Then the question arises: Is sexual identification a fact or a norm imposed by society?

Studies on this question are mostly lacking. Here’s one that states 15-35% of non-intellectually handicapped (ie. are sufficiently cogent to make their own reliable choices) identify as LGB. In the same article, a psychologist states that the likelihood of someone with autism not identifying as hetero is 2-3x more likely than the normal population.

Playing with the numbers

Above I noted that 9% of Millennials, Miranda Chase’s cohort, are likely to identify as non-hetero. If those with autism, are 2-3x more likely to identify that way, that says that 18-27% of them do so. That is in keeping with the 15-35% statistic. For Gen Z autistics those numbers become 32-48% (a third to a half) of the entire population. (versus 2.6-3.9% for us Boomers).

Where Is This Going For Me?

I don’t really know. I’m not going to suddenly “flip over” and become a major non-hetero writer. It’s not who I am. But am I going to be listening more to my characters when they suggest that they aren’t like me, as Miranda Chase did in her very quiet way? I’d have to say the answer is yes.

Why is it yes? I’m the author, I’m in control, right? Not completely. An author has to respect the integrity of the character. Making them behave in ways that aren’t true to them can “break” the character, making them unbelievable or untrustworthy within the scope of the story.

Is Miranda suddenly lesbian or bi-sexual? No. Miranda is a woman with autism, who doesn’t understand societal norms, and is instead making choices based upon who she likes and wants to be with. That strikes me as a pretty glorious way to be. She is, for lack of a better word, herself.

I hope, as an author, that my characters in the future will have a greater ability to make a choice of their own without my “boomer societal norms” being imposed on them—in any area of their thinking.

Is it a truth or a societal norm that “Women have no souls” as was argued in 575? Or that: “Women should remain at home, sit still, keep house and bear and bring up children… If a woman grows weary and at last dies from child bearing, it matters not. Let her die from bearing – she is there to do it.’” (Martin Luther)

Is it a truth or a societal norm that we must live within the hetero bounds of the gender we were born with?

You know my answer. Look at the evidence and make yours.