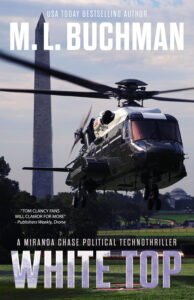 …that we hope we never, ever see!

In creating my latest novel, I spent a lot of time learning about emergency air generation systems. And they are both fascinatingly complex and relievingly simple. As to why their relevant in a Miranda Chase novel about the Marine Corps helicopters that transport the President and Vice President…well, that would be telling.

Regular breathing air for almost all aircraft is very simple. The outside air is gathered from the jet air intake, cooled appropriately, compressed up to standard atmospheric pressure (at 7,000′ rather than Sea Level, mostly to ease the strain on the hull), and fed into the cabin (and, conveniently for the crew, the lower pressure keeps us passengers a little sleepy). 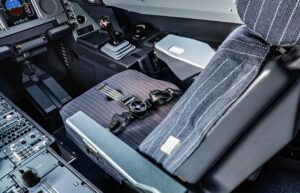 Airline pilots have a very simple solution, a special mask with a direct connection to an oxygen tank is close to hand. If you check out our old friend the Airbus Cockpit viewer, first encountered in NerdGuy #28, and look at the arms of the pilot’s and copilot’s seats, you’ll see that the outer arm is much larger than the inboard one. It also has a nice fat button that’s easy to find. Don’t waste your time looking in the pilot’s personal glove box…it’s out of view right behind there under a protective flap. 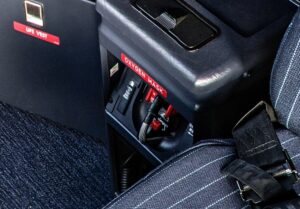 Here’s a much better view of one beside the observer pilot’s jump seat. These should easily last long enough to get down safely…if that’s going to happen. If you want to see one deploy, check out this incredibly tedious video (jump to 2:50).

The flight attendants will have access to similar portable systems so that they can give help around the cabin.

Having airliners carrying around great canisters of oxygen for all of the passengers is prohibitive for a couple of reasons: weight and constant maintenance being the two major concerns. Also, three of the four emergency oxygen system fires listed in Wikipedia were caused by canister-based failures. The infamous fourth, the 1996 crash of ValuJet 592, was due to improper handling of oxygen generators. So, a different solution had to be found, and it was: chemistry.

An emergency air generation system rarely needs to get you down to landing. It’s main purpose is to last for the decent from cruising altitude (35-45,000′) down to safe breathing altitude (below 10,000′). Under normal conditions, this would take about ten minutes. Rapid descent probably under four. Emergency dive…yeah, that’s more Hollywood than reality unless it’s going to end very badly.

The normal oxygen generator system on an airliner runs for 15 minutes, which is plenty of time under almost any circumstances. The extremely rare exceptions were due to pilot failure: HERE and HERE if you want to see the animated videos (warning, while informative, these chronicle air crashes). Bottom line: They’re very, very safe. 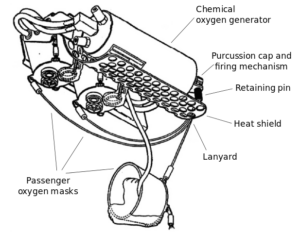 There’s a catch. To make the reaction happen, it needs a trigger–heat. So, in order to create an intensely flammable gas that we need to survive, we must apply heat, about 600 deg C (1,112 deg F). Spooked yet? Don’t worry, there is a heat shield. But you can also see in this diagram that there’s a firing mechanism.

Well, the designers were worried, too. They didn’t want a lot of unneeded oxygen floating about the cabin.

Next time you’re on a plane, listen carefully to the instructions about donning the oxygen mask, every word in all of those announcements has meaning.

“Pull the mask toward you.”

In doing this, you pull on a little trigger that ignites the hot chemical reaction to drive the breakdown of sodium perchlorate into salt and oxygen. And if it’s an empty row, the masks just dangle there, and no oxygen is generated. Why? Because no one was sitting there to follow that simple direction, “Pull the mask toward you.”

If there’s a cabin depressurization event or you’re in a smoky cabin and you feel like you’re choking, grabbing that mask may be your only chance. It will safely provide good, fresh oxygen. It’s just weird that it is also burning a very hot little chemical reaction just over your head. 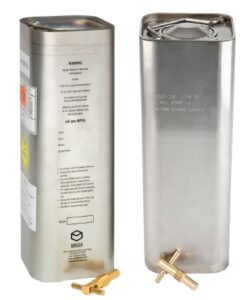 Suddenly need emergency oxygen while on a submarine, spaceship, or the International Space Station? It will probably come from one of THESE (pdf). The exact same thing as on an airliner, except its big enough to fill the entire volume for thirty minutes, instead of just your little airline face mask.

And if you ever wanted an understanding of what it means when something says Mil Spec, like why is military specified grade so important?

Guess what. You can shoot these and they still work.

And if you want to find out why NerdGuy went there? Check out White Top. Releases Tuesday 6/22 in ebook, print, and audio.