HOW DID I GET HERE?

Blame it on my wife. She introduced me to quilting while we were still dating. I’ve never looked back. People often ask about my hobbies. For twenty years, my hobby was writing. Now that I’m a full-time writer, I get to work full-time at my hobby (how cool is that?)! But quilting has stuck through it all. There have been rough patches, occasionally measured in years, when the quilting frame has languished in the corner, but it always comes back out eventually.

SAILING INTO THE LIGHT (~1998) [6’x7′]
This was my first-ever big quilt. Hand-dyed fabric, machine-pieced, hand-quilted. The story transitions from dark into light (lower left to upper right) using the Storm At Sea block. If you look at the second photo, down near my feet,  you’ll see a small, pale-blue, two-masted sailboat that is sailing out of the storm. Regrettably, this quilt spent too many years in our sunny bedroom and has faded almost past recognition though it still hangs in a place of honor. This was a whole family effort spanning an entire winter and into the spring. (Hand stitched in concentric circles, like a stone dropped in a still pool, bringing a peace and cohesiveness to the journey out of the storm.)
(written while quilting this: several unpublished books that will never, ever see the light of day. Seriously, trust me on that. Ick!) 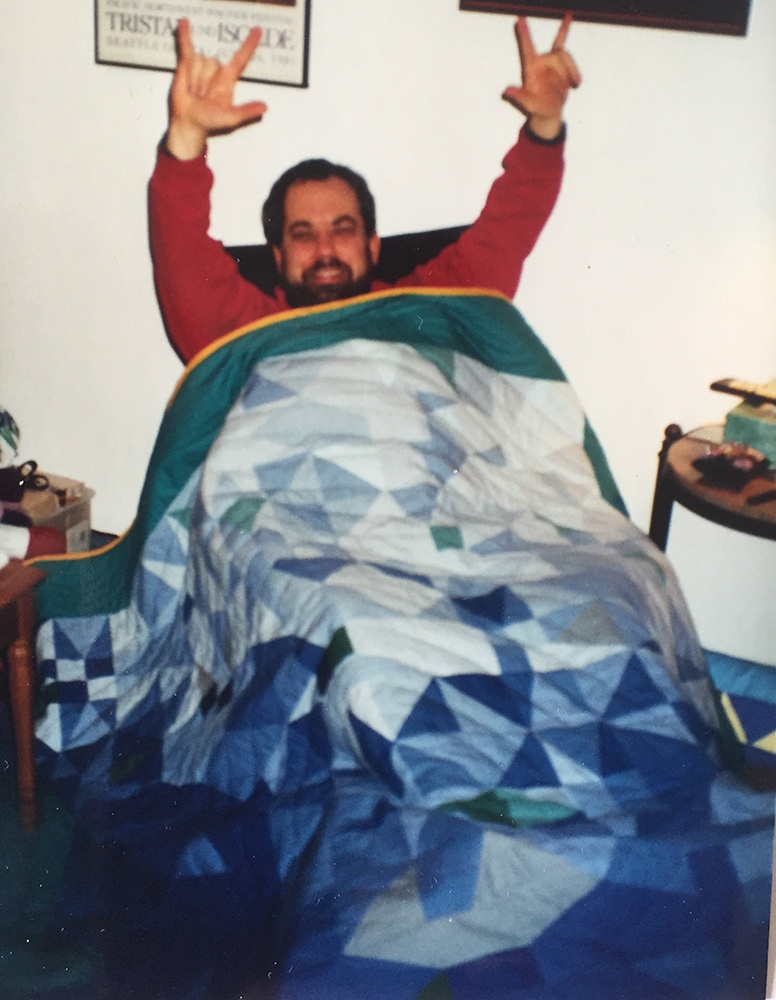 An early kit quilt  (~1999) [2’x3′]
(Accompanied by my muse Androcles the Lion, Licorice the tiny black writing cat, Seymour the fox, and Harold the Parrot from my SF title: The Nara Reaction). I learned about strip piecing on this one. 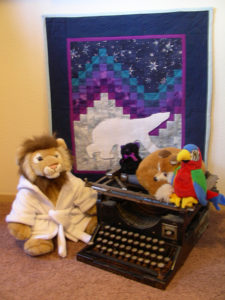 A number of quilts occurred in these years, but I’m having a hard time finding photos. I’ll keep looking.

My first solo quilt: a double Irish chain. (~2005) [7’x7′]
Note the cool edge detail. Strip pieced. Simple diamond machine-stitching for strength as a bed quilt. The entire top was done in a single, straight-thru, afternoon, evening, and night with a binge of Harry Potter movies in the background.
(written while quilting this: Where Dreams Are Born -my first ever romance) 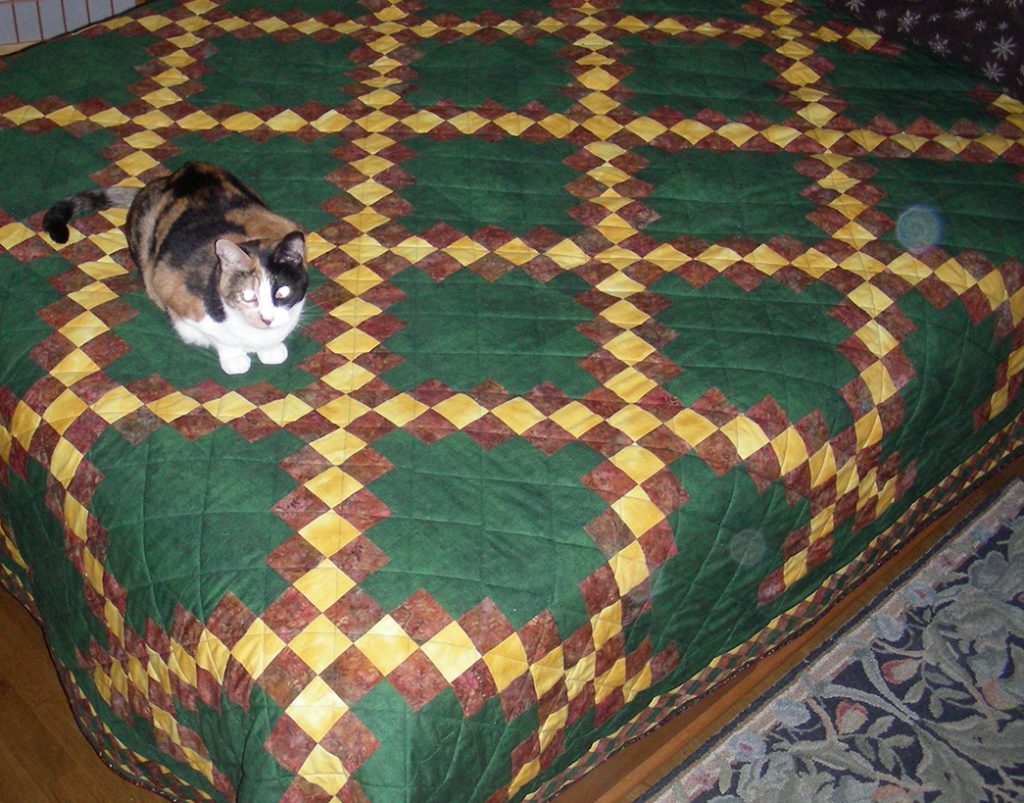 A sampler my wife calls “Matt’s brain on quilting.” (~2008) [5’x6.5′]
Another solo effort, it’s a scrap quilt (100% from the leftovers bin). It’s built in what’s called a window-pane style. Note the third panel on the top is a window pane of the quilt itself. And if you look closely at the third panel in that, you’ll see a stained glass fabric—window pane in a window pane. I learned an awful lot making this one. This top was also completed mostly in a single, overnight binge. No movies this time.
(written while quilting this: I spent that night busily mulling over my first military romantic suspense called First Chef. No need to go looking for it, it was eventually sold, renamed, and released as The Night Is Mine (#1 in my Night Stalkers series). This wild quilt and Emily Beale were sort of born together in the same night.)

STREAMING THROUGH THE SEASONS (2003-2016). Life got busy and this one spent a lot of time in the bin. It was designed as a triptych for a stairwell in 2003, but mostly built over the years 2016-2017. The stream flowing from season-to-season, slipping out of the lower right of one quilt and into the upper left of the next. The three, 3’x4′ panels could be shifted so that the indoor quilt on the top matched the outdoor season. Regrettably, we no longer have the house with the grand stairwell, but these three do adorn our living room walls side-by-side rather than stair-step fashion as intended. These ultimately took my wife and I hundreds of hours. Machine-pieced in sections then appliqued. The machine stitching is both the waves of water flowing and the cycle of the seasons. (They actually are rectangular, it’s my pictures that aren’t.)
(written while (actively) quilting this: Damien’s Christmas, Wild Fire, Target of Mine, Nathan’s Big Sky)

Spring The stream flows (in a curvy Michael James pattern) out of ice, past icy rock, alongside the rare trillium flowers that are so ephemeral. Above, the leaves (Maple Leaf block) begin to unfold and color as the geese (Flying Geese block) fly toward the summer.

Summer. The stream slows and eddies, creating a pool for the mama and cub black bears (Bear Paw block) to go fishing in. The leaves turn to their deep summer colors, sliced by bright yellow sunbeams, before revealing the first hints of fall colors.

Fall. The stream becomes lost, hidden (except for tiny flecks of blue) beneath the splendor of the fall colors. But the seasons are changing. The lush grasses of summer fade to bare rock. The geese are now flying the other direction, away from the graying winter sky, and finally the fall colors fade into browns. The stream slides past icy rock, under a fallen log (Log Cabin block) and flows beneath the ice. In the far lower right corner, there’s just the slightest hint of the hope of returning spring. 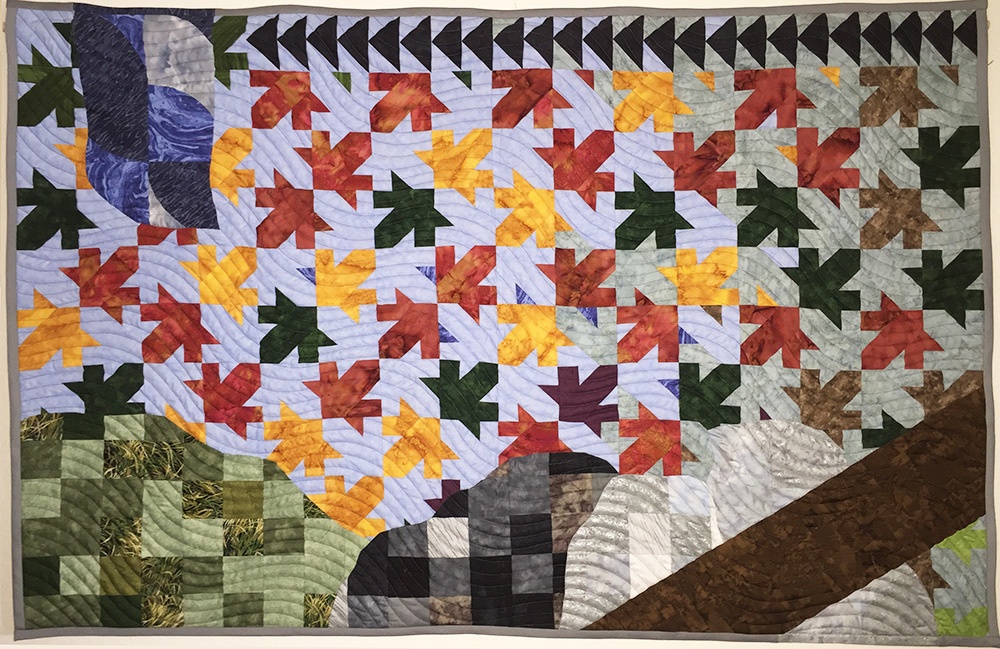 STAR OF STREAMS  (in progress) [3.5’x3.5′]
This is an homage quilt, made entirely of the leftover pieces of the “Streaming Through The Seasons” above with the sole addition of the night sky. In a traditional Amish Star of Bethlehem pattern, it radiates outward from the core of the Earth. The dark, unknowable center, gray rock, brown dirt, green grass, rushing blue waters, 4 seasons of leaves, blue sky, and finally the stars. All connected together in a continuous rolling cycle of the seasons. Getting those diamond points just about made me crazy.
(written while quilting this: Heart of the Cotswolds: England, Wild Justice, The Sum Is Greater…so far. This quilt is currently on hold while I gear up to design and tackle the quilt stitching.) 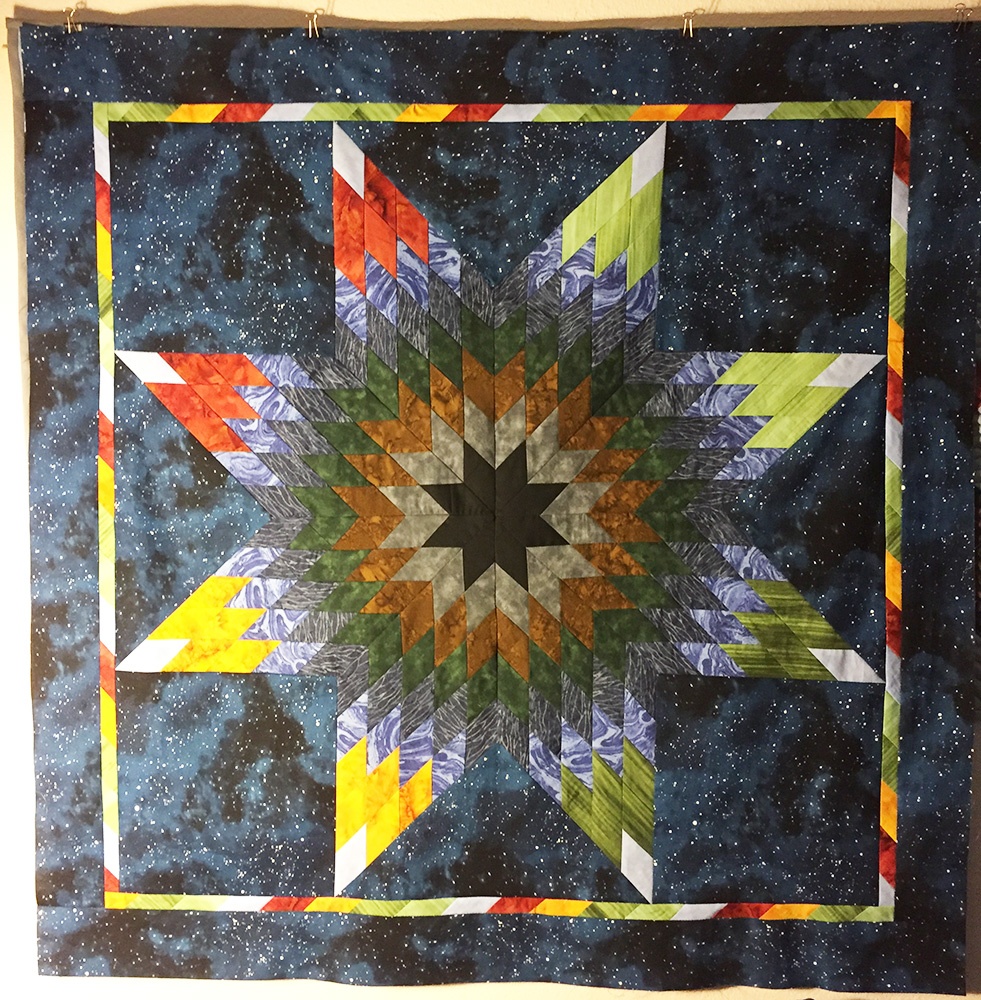