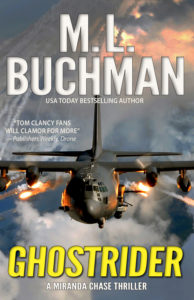 An AC-130J “Ghostrider”—the latest variant of America’s most lethal aerial gunship—goes down hard in the Colorado Rockies. Except the data doesn’t match the airframe.

Air-crash genius, and high-functioning autistic, Miranda Chase leads her NTSB team in to investigate. But what they uncover reveals a far greater threat—sabotage.

If she can’t solve the crash in time, a new type of war will erupt. One far too close to home which threatens to shatter her team.

As soon as Lieutenant Colonel Luis Hernandez broadcast the final report from aboard the diving plane—“Negative recovery. Negative control.”—he released his seat harness.

The plane wasn’t quite in freefall, so he fell into the yoke and flight console. “Aw, fuck.” Like it was going to hurt anything now other than his ego. The plane was safely past recovery and no one was left aboard to see anyway.

He pulled off his headset and began climbing uphill through the Hercules’ cockpit. He moved fast in the near freefall. Two of the thirteen bodies scattered strategically through the plane had ended up in the aisle and he was forced to crawl over them. They were wearing his and Danny’s dog tags. They were also close to their build and coloring just in case anything survived the crash. Hopefully not, they weren’t that close because no way did he look like the fake Luis. Homely bugger.

He continued aft quickly, having to struggle to shake off the memory of the last time he’d done this. He’d crawled over the bodies of his own crew when his C-130 Hercules had been shot down in Afghanistan due to insufficient fighter support in a war they never should have been in. He’d fought the plane all the way down—been one of the few to make it. He came to, crawling from body to body looking for other survivors.

At least this time, neither the iron stench of hot blood nor the stinging kerosene of burning Jet A fuel permeated the air. Everyone except he and Danny had been dead before they boarded this flight.

The ladder down to the main cargo deck was easier to navigate. They were in true freefall now and he could just pull himself along it.

Major Danny Gonzalez had left the forward passenger door open after popping it at thirty-nine thousand feet. Though, Luis supposed, his copilot was just Danny now. Their military rank was one more thing they’d all agreed to leave behind along with the dead.

Luis shrugged into the parachute rig.

He took a moment to ensure that he was oriented properly and then grabbed the bottom edge of the door. It wouldn’t do to fling himself out of the plane and straight into the massive four-blade propeller of the Number Two engine spinning at a thousand RPM.

The fuselage twisted sharply and he almost lost his grip as it began to tumble.

Looking out into the darkness once more, he saw that the propeller was no longer an issue—the entire wing had ripped off.

The temperature was a bitch though.

Even on a warm June evening, ten thousand feet above Aspen was damn cold. Be lucky if he didn’t have frostbite by the time he got down. But no time to pull on a balaclava—the ground was coming up fast.

He still made a point of flinging himself downward as he exited, just in case the tail was still attached.

As soon as he’d ejected, he opened his black tactical ram-air chute. It was for night insertions deep behind enemy lines, and, like his specialized clothing, had the radar signature of a bird—a small one.

He watched the plane continue down. Less than five seconds after he had his chute deployed and stable, the Hercules impacted at twelve thousand feet atop a high peak. It was supposed to plunge into the back-country wilderness beyond, but it didn’t really matter. At almost five hundred knots, the destruction was more than sufficient.

As rigged beforehand, one of the rounds of 105 mm ammunition for the big howitzer—the main weapon of the AC-130 series of gunships—ignited on impact.

In a single moment, the other eighty rounds lit off.

The combination of all of the forty-two-inch-long, thirty-three-pound rounds igniting simultaneously unleashed sixteen hundred pounds of high explosives in the heart of the plane.

If there had been anything left of the fuselage, it was now shattered. Probably the top of the mountain as well by the scale of the blinding fireball that lit the surrounding mountains like daylight. He hoped that no one was looking in his direction for the one moment he was starkly lit against the night sky.

The wings landed farther down the slope, bursting into flame when the fuel tanks breached. The conflagration spread rapidly upslope. In minutes, any remains of the plane would be engulfed as well.

Then the shock wave caught up with him.

For a thousand feet of descent, he could do nothing but curse and flail as the shock wave dragged him wherever it wanted to.

Once it cleared, he was amazed to still be holding the control toggles. The wonders of stark terror.

He hadn’t jumped much since Basic, just enough to stay qualified. But the loud roar of the wind had to be a bad sign. Yanking on the toggles didn’t seem to do much either.

Not daring to let go in case he couldn’t find the handles again, he almost snapped his own neck from nodding hard enough to flip down his night vision goggles. He managed it just in time to see what was happening above him.

“Shit!” He didn’t have a parachute. He had a ripped-up mess of tangled nylon. It looked as if half the chute was missing and the rest was snarled.

He yanked the cutaway. The general was going to be pissed if someone spotted the errant chute, but Luis was out of options.

One side of the risers released, but not the other.

Dragging the main chute along off his right shoulder.

Deploy the reserve and pray it didn’t snarl in the crippled main. It came out clean and almost gutted him with hard deceleration.

He was well past Snowmass, but nowhere near the Aspen car racing track where Danny and their motorcycles would be waiting.

Down below there was no sign of anything except sharp peaks and deep valleys.

The wind still seemed too loud. Up above, two-thirds of the reserve was drawing clean, the last third was fighting with the trailing main—and losing.

“Two thirds has gotta be better than nothing, right?”

A massive edifice loomed up in front of him.

Want more? Start this amazing adventure and hang on because the crisis is only beginning.