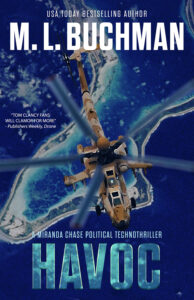 As fans of NerdGuy know, Miranda Chase #7, Havoc, is coming out on April 27th. And I take the task of capturing the techno of my technothrillerishness very seriously. Never moreso than when I’m talking about aircraft.

Why? Because the kidhood dream that I didn’t get to live was to be an airline pilot. (I’m just colorblind enough to be disqualified from commercial aviation. I can see just fine for flying, but not well enough to make it a career.) That doesn’t stop me from having fun researching it.

The opening have Havoc does not go well for an Airbus passenger plane. (Don’t worry, later in the book it doesn’t go well for a Boeing airplane either.)

“The landing of the Airbus A330-900neo unfolded with a movie-like slow motion feel—even more painfully drawn out than watching Engine One destroy itself and the wing.”

I wanted to capture the cockpit as authentically as a setting as I could.

Only in older, or the least expensive aircraft are pilots still faced with a “steam-gauge” console.

Instead, modern pilots in modern aircraft face electronic displays that can pack significantly more information into single displays (information that might require reading and interpreting 5 or 6 steam gauges can be read in a single glance.)

Let me explain this image just a little as a step up to the next one.

Just search on Garmin 3000 for a lot more videos. I also read chunks of the 686 page instruction manual (again, just for fun–I’m weird that way).

It didn’t take me long to stumble on this site:

We’ll start with just this static picture, but it gets way more fun in a moment. Here’s a few things to note in a tour of an Airbus A330 airliner cockpit:

Now that you’re oriented… Let’s have some fun!

For this specific flight, let’s actually go into the cockpit, courtesy of Airbus.

Now that you have the gist of it, you can start exploring. Here are a few fun things I picked out to zoom in on:

Go back to the Airbus Cockpit 3D virtual tour…and look down at the floor. Specifically under the back of the left-hand pilot’s seat. See the little hatch? If everything else goes wrong, this is an emergency escape route, but where does it lead?

When passengers sit in an airliner, we know that our luggage and a lot of  other cargo are beneath our feet. But that’s not what’s below the cockpit. Under the cockpit is the avionics bay. This is a cramped space that is almost never entered during flight.

A typical avionics bay is where the airplane’s computers are mounted. Not one or two, but typically three completely redundant systems.  One of the many reasons that airplane flight is still the safest form of travel.

So next time you fly, feel ready to Nerd On!

And read Havoc to see how I applied all these hours of research.