As my dedicated fans will know, my next book in the Miranda Chase series is titled White Top (coming 6/22).

“White Top” is a common phrase to describe the helicopters used to transport the President, also called Marine One.  It is properly only called Marine One when the President is aboard, Marine Two for the Vice President. Very few others ever get to fly in a White Top: mostly visiting heads of state and the Commandant of the Marine Corps (the Pope did too). It is the world’s ultimate executive transport helicopter.

Because of their unique mandate, there are many strange and fun oddities about these helicopters and this Marine Corps squadron. I thought I’d share a few.

The group responsible for flying the White Top aircraft is Marine Corps Squadron HMX-1 (think Helicopter Marine Experimental 1st Squadron and you’ve got it–though the experimental part has been moved to VMX-1, except for the replacement Marine One helo). They were originally stood up (formed) in 1947 shortly after the Commandant of the Corps witnessed an atomic bomb test at Bikini Atoll. He knew he needed a better/faster way to get his Marines to the beach than long rides in landing craft and HMX-1 was created to study that need.

Jump ahead a decade to 1957 and President Eisenhower was on vacation  in Newport, Rhode Island when the Arkansas governor mobilized the Arkansas National Guard to keep black students out of white schools. Eisenhower mobilized the 101st Airborne to confront the NG and guard the students of the Little Rock Nine (this and this will get you started on this awful slice of history). The President needed to get back to DC fast. Parked nearby in case of emergency was an HMX-1 helicopter. It delivered the President to Air Force One in record time and set a precedent with the first-ever Presidential “lift.”

Over the years, several other outfits (Air Force and Army) tried to take over Presidential transport, but in the end, it’s all the Marines.

With 700 members, HMX-1 is the largest Marine Corps air squadron of them all. It is split into two sections: green side and white side. 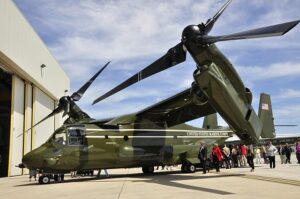 Green side mostly flies the MV-22 Osprey tiltrotor. The press gaggle following Marine One? They fly green side. Most of the luggage and merely VIP folks, they travel green side. Only VVIPs travel white side. An article on a couple of the other DC-VIP outfits can be found here.

Transporting the VVIPs of the American government is a very different proposition. Even though the white side helos fly for the same squadron from side-by-side hangars, white side technicians can’t just go over to the green side hangar at Quantico, Virginia to borrow a part or tool. Everyone working in the white side has an extremely high security clearance that can take a year or more to obtain (Marines will often “cool their heels” working green side while waiting for their white side clearance.) Every part must be fully vetted.

These helicopters, that initially got their White Top paint job when it was thought that would keep the helos cooler while sitting in the sun (it didn’t particularly but the paint job stuck), go through rigors that no other bird does. Here are a few:

HMX-1 is in the process of retiring their present fleet. The VH-3D Sea Kings (the ones in all the White House lawn photos), and the VH-60N White Hawk variation of the Sikorsky Black Hawk (mostly flown overseas) are going away. As these were on-boarded in the late 1970s and 1988 respectively, it’s about time.

After a massively ugly bidding process that caused years of delay, and a four-year acceptance testing cycle, we should start seeing the VH-92A Superhawks taking over the role this year (2021).  Which made them a prime target for my latest novel, White Top. (Hint: the first lift missions of the Superhawk don’t end very well.)

Perhaps the single most unique aspect of HMX-1 is their perfect record. They have never had a crash in their seventy-four year history.

Well, except perhaps in a couple of my books: