Humans tend to gather along the coast of continents. According to this Columbia University study, 40% of the human population lives within 100 kilometers of the coast. That’s a lot of people living near the sea. Most of the rest live along the rivers for obvious reasons. (Yes, I thought about Denver and Mexico City among others…but they’re just weird.)

So I tried looking up just what that implied. The world has roughly 1.1M kilometers of coastline. Therefore, 40% of the world’s population lives in an area of 100 x 1.1M km = 110 million square kilometers. Or do they?

What this does say though is that with a global total land area of 507,000,000 square kilometers, there are an awful places that are mighty empty.

Rather than looking at the least populous places on Earth…

Antarctica is its own special case as it technically has no residents and a vast amount of area. Its “population” varies from 1,000 (winters) to 4,000 (summers), with a land area of 14M square kilometers, giving it a ratio of 0.00007 to 0.00028 people per square kilometer. Of course, they tend to gather in cheery bunches (called bases), but it’s still a lot of open space.

But as I said, what if instead of looking at population density, we look at farthest from anywhere geographically useful, like a coast. These are called:

Each continent has a point that’s farthest from any shore. Some of these make a perfect kind of sense. For example:

North America: South Dakota. I mean, really? That was a surprise? The Pine Ridge Reservation at 43.36°N 101.97°W is the farthest point from any coastline in North America. Here are a few other gimmes (from Wikipedia): 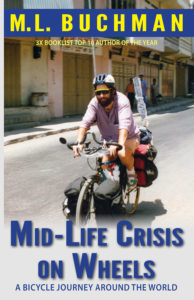 Then it gets interesting

There are three more Poles of Inaccessibility that I find absolutely fascinating.

This one is quite curious. It is considered to be the remotest place on Earth. It gets its own Wikipedia page as well. It’s 878 km from the South Pole Station. It also boasts the world’s lowest recorded year-round average temperature of -58.2C (-72.8F). YOIKS!

The Russians built a research station there in 1958. And it has been visited only a handful of times. Here’s a fun write-up on it by Dave Alf.

Did you ever wonder where satellites go to die? It’s called Point Nemo. It’s the place in the South Pacific Ocean that’s the farthest from any land. The reason satellites go to die there is that it isn’t always easy to control orbital decay. By aiming at the biggest blank spot on the Earth’s map, it decreases the chances of bothering anybody with anything that doesn’t burn up during reentry. (And no, there’s not a lot of wildlife at risk out there either, it’s an oceanic desert as well.)

One other piece of trivia about Point Nemo, it’s where I sent my evil villain from Miranda Chase #2, Thunderbolt, on her final flight. Let’s just say she wasn’t very nice and deserved everything she got.

This tiny splotch of an uninhabited island belongs to Norway. But that doesn’t place it anywhere near the Arctic. Instead it lies at 54°26′S 3°24′E, out in the nothing between Africa’s Cape of Good Hope and Antarctica. At just 49 square kilometers (19 sq miles), 780m (2,560′) tall, 93% glaciated, and completely surrounded by inaccessible cliffs, this is not a hot vacation spot. A land slip in the 1950s created a small island that could be landed on and weather stations have since had a history there. The main island is really only accessible by helicopter (when the winds drop below 50 knots).

And if you want to waste even more time with me than you already have? Visit this cool site. And be sure to look down into the comments as noted at the head of the article to find out how a perfectly decent lifeboat ended up at Bouvet and created a six-year quest for answers, uncovering a whole range of interesting facts.