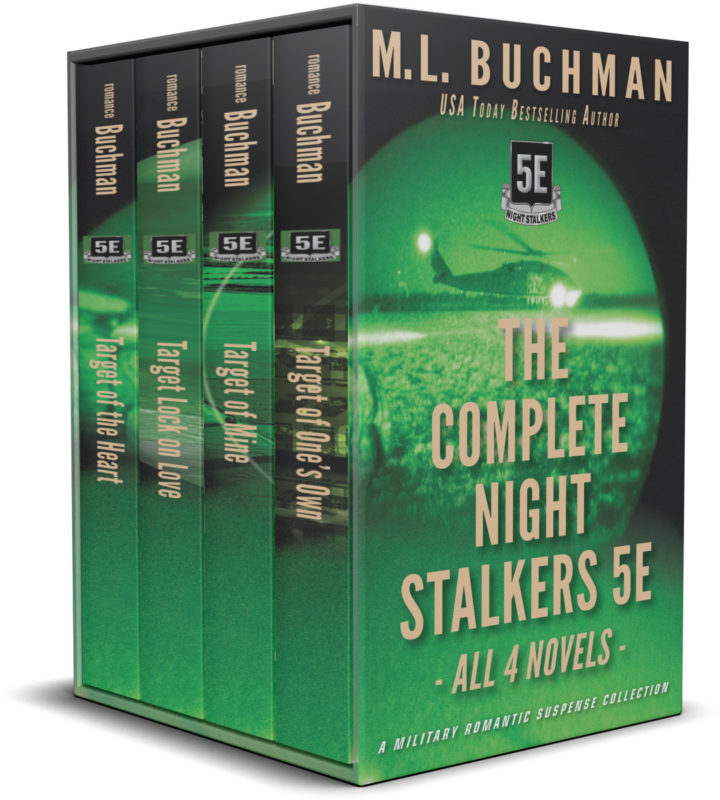 First there was the 160th Night Stalkers 5th Battalion D Company and the great Emily Beale.

Then they formed the 5E. The few who knew about them called them “E for Extreme.” Equipped with stealth helicopters, they take on only the most dangerous of Black Ops missions. Small, lean, paired with an equally elite squad from SEAL Team 6, their careers send them into dangers of both the body and the heart.

* Target of the Heart launches the team…and sends them into China in the dead of night.

* Target Lock on Love throws two pilots into the fray when a secret Russian drone factory threatens the future of international military balance.

* Target of Mine puts the team directly in the sights when they must abandon their helos and plunge into the lethal Honduran jungle to take down a conspiracy.

* Target of One’s Own drops a feisty drone pilot into an elite race car as she and the SEAL team’s leader go after an arms smuggler hiding in the ultimate driving event, the Dakar Rally.

Discover the laughter, tears, and love as adventure flies their way.

Target of One's Own
Disclosure of Material Connection: Some of the links in the page above are "affiliate links." This means if you click on the link and purchase the item, I will receive an affiliate commission. I am disclosing this in accordance with the Federal Trade Commission's 16 CFR, Part 255: "Guides Concerning the Use of Endorsements and Testimonials in Advertising."